The beginner’s guide to web 3, blockchain, and cryptocurrencies

What is Web 3 and how is it different from Web 2?

It’s important to understand the difference between Web 2 and Web 3. Even at a high level.

Web 2 is the current version of the internet most of us are familiar with. Sometimes referred to as the read-write web. Wikipedia classifies it as websites that are easy to use and emphasize user-generated content. Web 2 platforms would include:

As you can tell, Web 2 is mostly dominated by profitable companies. Your data is collected, controlled, and monetized. Your content can be blocked or removed at the discretion of those who benefit.

Web 3 is more of a backend technology and operates on protocols led by blockchain. With Web 3, privacy is built within the technology. You have the power to decide who if anyone collects your data.

The key innovation of Web 3 is the creation of platforms that no single entity controls, yet everyone can still partake in and trust. Web 3 isn’t governed by institutions such as big tech companies or central banks.

It reflects and rewards the value of user contributions to its online ecosystems. The main problem Web 3 tries to solve is being an open network, trustless and permissionless. However, its benefits go far beyond this.

According to Investopedia, blockchain is similar to a traditional database although instead of storing data in tables it stores data in blocks that once full are essentially ‘chained together’.

Traditional large databases are housed on servers in warehouses built by many powerful computers. These are owned and controlled by a single entity such as a company, individual, or government. The keyword here is ‘controlled’. This is important.

Facebook’s data warehouses are owned and controlled by Facebook in various locations around the world. They have complete access and control over your data. If their servers shut down, then so does access to your data. Which actually happened recently, of course, the reason is still unclear.

With blockchain no single person or entity can have control, instead, all the participating users adhere to the protocol.

In a decentralized manner, blockchain makes an irreversible timeline and timestamp of the data.

The purpose of blockchain is to allow digital information to be recorded, distributed but not edited.

A cryptocurrency is a virtual currency that operates on blockchain technology. It is completely digital and secured by cryptography and the protocols built into blockchain. Cryptocurrencies also allow secure payments to be made online. The currencies are denominated in terms of “tokens” or “coins”.

It is designed to work as a medium of exchange where every single transaction is recorded on the ledger (i.e. the blockchain). All transaction records are store and can be verified by participating members.

Bitcoin was the first blockchain-based cryptocurrency and it is still the most popular, closely followed by Ethereum.

There are arguments for and against its reliability as a “store of value”. However, it does currently contain purchasing power and will continue into the future.

It has also become easier to access cryptocurrencies with exchanges like CoinBase or  Binance. Setting up a wallet and depositing funds can take less than a minute.

The application of blockchain in web 3

Blockchain enables decentralized cryptocurrencies like Bitcoin and Ethereum to exist.

A great explainer thread for the application of web 3 technologies can be found below:

The successful application of this technology can also be demonstrated through a decentralized application (DAPP) game called Axie Infinity.

The play-to-earn game operates on the Ethereum blockchain. The Axie’s (little monsters) and the associated gear are non-fungible tokens (NFT) that can be used in the game, held, or traded.

The in-game currency for Axie is ‘SLP Token’ which can also be traded for Ethereum and then again into local currency such as $USD or $AUD.This might seem inconsequential but if you look at Axie Infinity’s growth you’ll see that this type of model is likely here to stay. In Packy McCormick’s email newsletter he showcased how fast Axie has been growing. In July 2021 Axis revenue was $80m, this was 25x higher than May 2021. 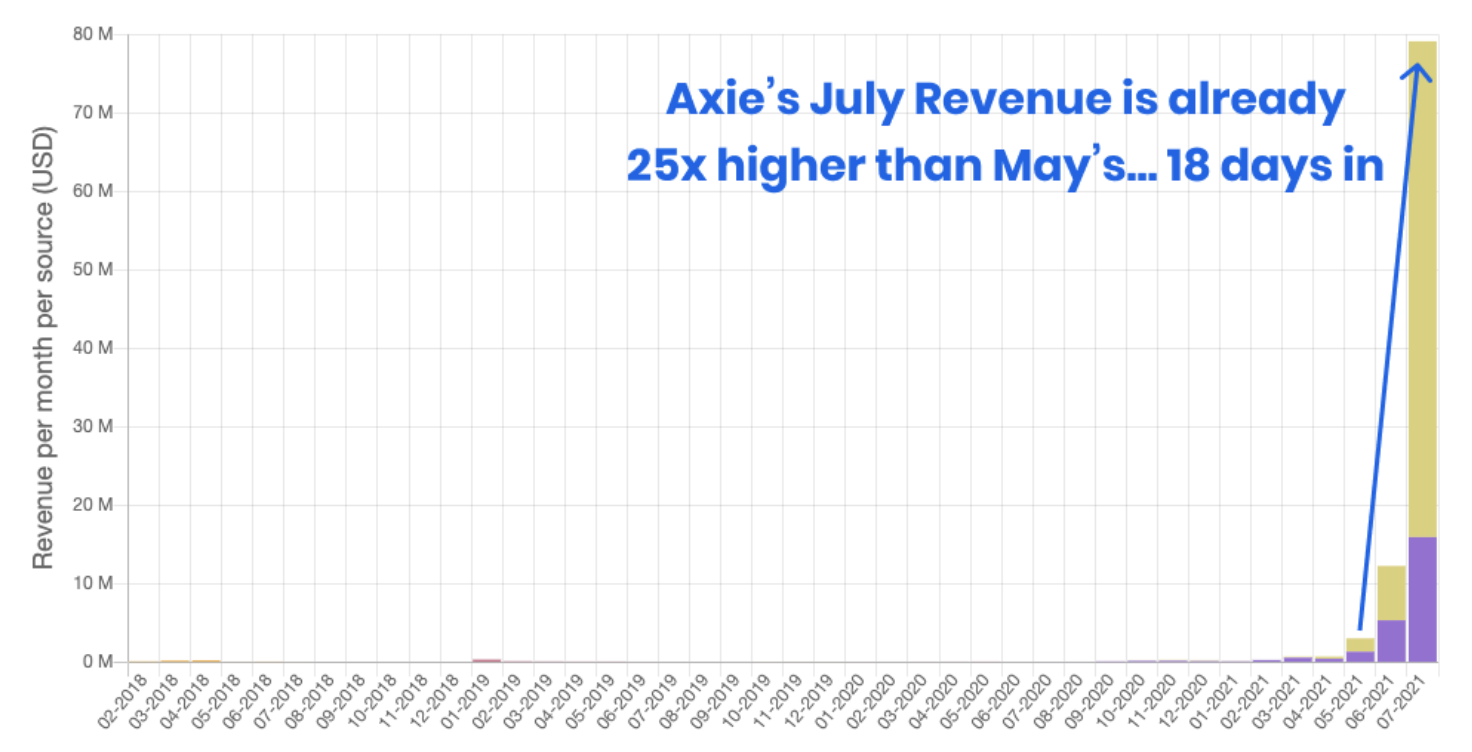 If this wasn’t impressive, two months later in September 2021, Axie Infinity surpassed $2B in NFT sales. According to Dapp Radar, Axie Infinity was the biggest contributor to the NFT economy. 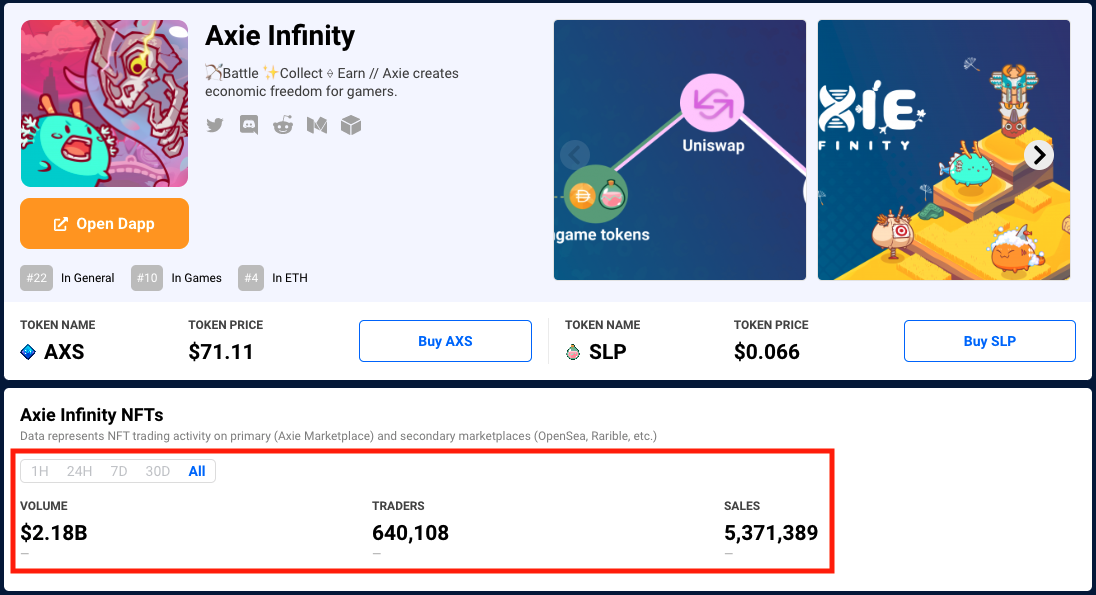 Because Web 3 is open, trustless and permissionless anyone with an internet connection can participate and be rewarded. There are 4.66bn active internet users worldwide, which means only 60% of the world is online. Therefore, the more connected the world becomes the more likely Web 3 technologies will succeed. Especially in developing economies.

The global pandemic caused a huge spike in unemployment. This is when locals in the Philippines became heavily involved with Axie Infinity. It allowed them to generate an income much higher than they otherwise would through their regular jobs.

Axie NFTs have risen exponentially in value since their inception. The average transaction for an Axie Infinity NFT is about $420USD as of 1 October 2021. This has made the barrier to entry much higher. As a result, there are now “Angel Axie Investors” who purchase the Axie NFTs and employ “scholars” to partake in a revenue-sharing arrangement.

There are plenty of different investment avenues within the Web 3 economy. You could invest in cryptocurrencies, NFT’s, new projects, or even participate by becoming a creator.

With reference to Axie Infinity, there would be a couple of opportunities to invest, some of them include:

Why are web 3 assets so popular right now?

The pandemic is an easy justification for why Web 3 and its underlying technologies might be gaining attention. Cryptocurrencies are also the bread and butter assets of the Web 3 economy.

Beyond the technological advancements, cryptocurrencies are can be viewed as a better store of value than fiat money.

Fiat money is legal tender where the value is tied to a government-issued currency such as the U.S dollar. Fiat currency is issued and governed by central banks. Cryptocurrencies are governed by their protocols, code, and communities.

Unlike fiat money, cryptocurrencies like Bitcoin and Ethereum can be distributed, traded, and stored on the blockchain (the decentralized ledger system).

Since fiat money is government-issued money, more can be printed at any given time. Too much money printing devalues the currency and leads to inflation.

Countries such as Venezuela and Argentina are subject to such high rates of inflation and currency devaluation – through printing money. This makes cryptocurrencies like Bitcoin and Ethereum a more attractive store of value.

Governments have responded to the recent pandemic through printing money, which is referred to as an “economic-stimulus” response. McKinsey & Company measured this against the economic-stimulus response in the 2008 financial crisis for perspective. 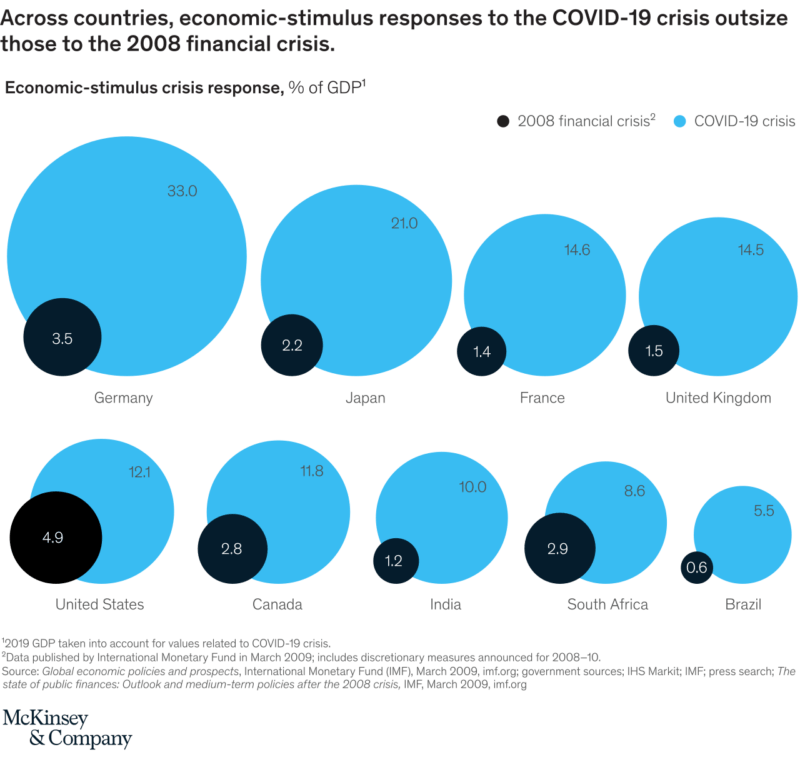 Web 3 technologies have a long way to go before they’re mass adopted. However, they’re a step in the right direction and solve many systemic issues. 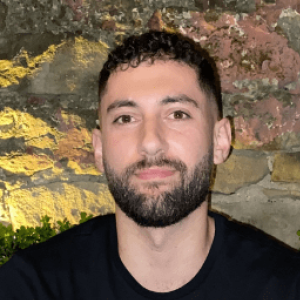 Luciano is a freelance writer and growth marketer. He co-founded Ticker Nerd, an investing newsletter that has since been acquired. Now Luc blogs about copywriting, marketing, software reviews, and self-improvement. He also holds a Bachelor of Commerce (BCom) Degree from The University of Sydney. Prior to writing and reviewing software, Luc worked for large companies including Finder.com and The Reserve Bank of Australia. When he's not working he's spending time with his dog or spearfishing with his brothers.

Luciano is a freelance writer and growth marketer. He co-founded Ticker Nerd, an investing newsletter that has since been acquired. Now Luc blogs about copywriting, marketing, software reviews, and self-improvement. He also holds a Bachelor of Commerce (BCom) Degree from The University of Sydney. Prior to writing and reviewing software, Luc worked for large companies including Finder.com and The Reserve Bank of Australia. When he's not working he's spending time with his dog or spearfishing with his brothers.
This blog is supported by readers. I got to a lot of effort into personally using and thoroughly testing every product (digital or physical). So, I may earn an affiliate commission if you buy a product or service through a link, at no additional cost to you.

I help eCommerce and SaaS companies attract and convert high-quality traffic. I also like to write. Mostly about marketing, copywriting, side hustles, software reviews, and personal development. Stay connected below.